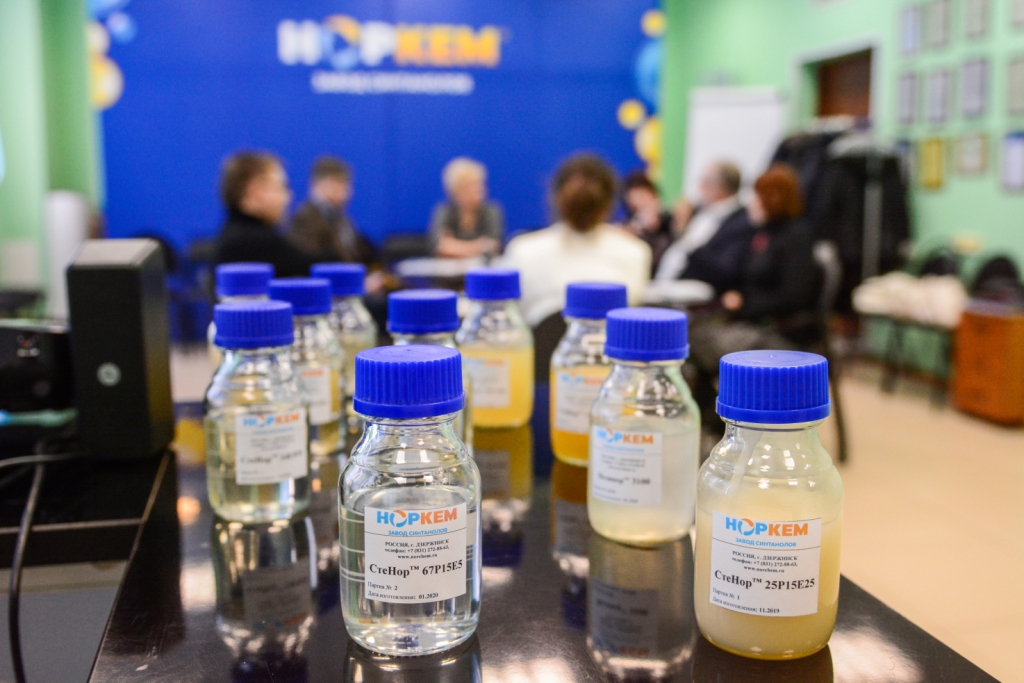 R&D Centre NORCHEM LLC, a part of the NORCHEM Group of Companies, has completed the process of consolidating a controlling stock interest in Sintez Pav OJSC (Shebekino, Belgorod Region). It is a scientific production company, a pioneer of domestic scientific research on surfactants.

The history of the modern Sintez Pav is rooted in the Soviet past. In 1958, on the basis of the main chemical plant in Shebekino a Scientific research Institute of synthetic fat substitutes and detergents was founded in the framework of the implementation of the resolution of 1957 "On the development of the chemical industry"

The Institute was engaged in the development of surfactants, synthetic fatty acids, higher synthetic alcohols, plant engineering, and installations for their productions.

A wide range of activities and unique developments allowed it to become the leading  specific research Institute of the USSR. An important role in the formation of the Institute was played by P. Rebinder, Academician of the USSR Academy of Sciences. At the time of its prosperity, the best scientists of the industry worked at the Institute, the team reached more than 2000 people, among whom there were 6 Doctors of Sciences and 50 PhDs. The works of the employees were regularly published in both domestic and foreign journals; almost every year, scientists gave reports at conferences abroad.

It is worth noting that the Institute produced every year experimental  batches of chemicals  in the amount of up to 2,500 tons, developed 175 technological processes, received 5 foreign patents and 700 copyright certificates.

Today Sintez Pav specializes in the development of a wide range of surfactants for industrial and household use. The Institute successfully combines scientific, experimental research in the field of colloidal chemistry with applied developments and practical activities in the field of synthesis of promising surfactants. One of the key competencies of the Institute is the development of a technology for the chemicalization of the extraction / processing / transportation processes for the oil and gas industry.

In the opinion of Oleg Orekhov, Director of  R&D Centre NORCHEM LLC, the process of centralization of scientific and technical knowledge that has begun at NORCHEM Group will be supported by the "fundamental industry knowledge of the Institute", which will generally strengthen the knowledge base of the R&D Centre. Also, the trend of NORCHEM® to strengthen its presence in the market of industrial solutions will be supported by the work collective of Sintez Pav, which consists of highly qualified researchers, many of whom have a Ph.D. in chemical sciences. Attracting highly qualified people to the team, strengthening the information and material and technical scientific base, increasing the share of research and development work, joint participation in the work on key projects of scientists from academic and industrial scientific organizations is the most important component in achieving the ambitious strategic development targets of NORCHEM Group.

Director General NORCHEM LLC Yury Dudakov also notes that the transaction will allow obtaining a synergistic effect from the developments of Sintez Pav, supplementing the NORCHEM® product portfolio with unique products, expanding the business in the oil and gas segment and preserving the development of domestic scientific potential because the systematic strengthening of scientific and technical potential is necessary and very important for ensuring sustainable growth, competitive advantages and innovative security of NORCHEM Group of Companies.